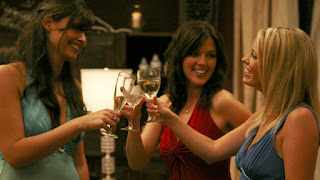 God bless the gals, they really are sort of cute with their TV choices.

My friend Sarah came over to Chez JBK Monday for one of my famous Omaha steak dinners (accompanied by a delightful Shiraz on the Cudgee Creek label) and we started arguing about what to watch on my fabulous TV set.

It was, of course, a crucial make or break night for the Yankees in the ALDS and I felt I should watch the game, if only to be able to have a conversation about it the next day with everyone who seems to live and die that stuff. But she said Monday is "The Bachelor" and she had got into it this season, so she wanted to watch that. And there is a lot of cleavage on that show, you've got to give it that.

Thanks to picture-in-picture we were able to sort of watch both, and when the game rapidly became a debacle for the Yanks, I switched the set-up so the game went into the little screen without sound, but could still be monitored, and "The Bachelor" went into the big picture.

Well, that show really is pornography for girls. She was oohing and ahhing over everything - the house they get to stay in, the fun dates, and the whirlwind night one of the girls got when she went on a "one on one" as they call it.

And all totally unrealistic of course. Hey girls, I'd also whisk you off on a private jet for a night in San Francisco if ABC was bankrolling the date.

I have to admit, it was fun watching the really evil and envious looks on the other girls' faces when the girl who got the exclusive date was getting fitted with a million dollar necklace to wear.

This was the first time I've seen the show this season, and I would have to vote for Jenni the "Phoenix Suns dancer."
Posted by J at 1:37 AM

I don't think it's a great batch of women this year, there's none really sticking out in my mind. I am surprised you liked Jenni best though, I thought you would like one of the big haired blondes! :)

You loved every minute of it!

Haha I liked Sheena, she seemed actually pretty cool. I don't know if she will win though.

Theres something about Brad (the Bachelor) that's off. I usually like them but this season he just seems too much (hard to explain)

Sarah he loves The Apprentice too!

That's why I can't stand shows like this. They pit these women against each other and make them all look so desperate. They make them seem like they hate each other. Maybe they even do but it's not realistic to be seeing it like this!

I can't believe you like Jenni? She's a phony!