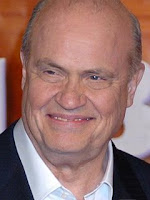 Below is a video clip of Fred Thompson, now one of the leading contenders for the Republican presidential nomination, when he went by the stage name of Edgar Buchanan.

It's the opening of the old sitcom, “Petticoat Junction,” and Fred (Edgar) plays Uncle Joe.

Now, as a student of television, as I indeed am, here's some genuine trivia factoids for you:

The dog in it was the mother of famous movie dog, Benji.

And Petticoat Junction, now occasionally seen on TV Land and Nick at Nite, was one of the many classic “rural” shows that aired on CBS back in the 1960s and 70s, including Green Acres, The Beverly Hillbillies, Mayberry RFD and The Andy Griffith Show.

Even though those shows had amazing ratings, the demographics weren't so good, and CBS canceled them practically in one fell swoop in a bid to improve its demos. In fact, Griffith once joked that CBS woke up one day and canceled every show that had a tree in it.

Seriously, those shows were regularly getting 40 and 50 million viewers each. Today, a network would KILL to get numbers like that.

CBS went into the syndication business with these shows as the backbone. Its syndication unit eventually split off from the network and was called Viacom.

Even more irony, the MTV nets include Nick at Nite and TV Land, which air a lot of the old CBS shows. It's all very incestuous.

I think Fred Thompson is making the libs nervous, that's why all the attacks on him!

Green acres is the place for me.
Farm livin' is the life for me.
Land spreadin' out so far and wide
Keep Manhattan, just give me that countryside.

New York is where I'd rather stay.
I get allergic smelling hay.
I just adore a penthouse view.
Dah-ling I love you but give me Park Avenue.

You are my wife.
Good bye, city life.
Green Acres we are there.

Hehe that poor dog. It looks like they just throw him up at the edge and then pull him down again!

Those were the days when TV theme songs actually told the story abut the show - like Gilligans Island or Brady Bunch. Now it's usually just some short music over some pictures. But I don't know if the shows were better.