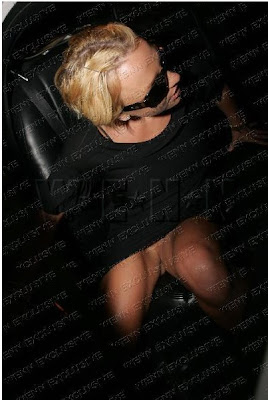 Once upon a time, when there were pictures circulating of Britney Spears out in public going commando, people were sort of intrigued (in that horrified way) as you watched her career melt down right before your eyes.

Apparently, she did it again last night in Vegas after the MTV Awards.

Someone sent me a series of pictures like this one of her out and about on the town.

What a sad case of a huge star melting down and totally throwing away a promising career and image.
Posted by J at 4:33 PM

well at least her hair has grown back! :)

She is a WRECK

Hey too saucy, don't forget us!!

Nice double standard you have going on there in NYC.

What about those kids of hers!!! How sad is it that Kevin Federline would be the good parent????

what the heck does norman hsu's shirt and shoes mean?

anonymous, don't worry, that's just my husky right-wing friend. His comments often make no sense. But he's trying desperately to interject news about a tiny fund-raising problem into a post about Britney and turn it into a huge scandal, which doesn't exist. Unlike the problems in his party, the home of sexual deviants, warmongers and crooks. Thank you.

She was terrible on MTV and should NOT have wore those clothes!

Ok, I felt sorry for her.