Oh yeah, he looks innnocent too 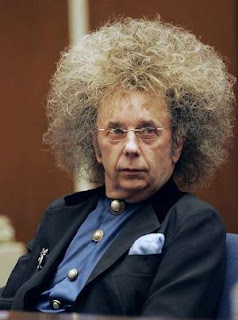 Let me give a bit of advice to anyone married to (or even just hanging around) a celebrity in Los Angeles: run the hell away as fast as you can.

Because apparently they can murder you and face no penalty.

Of course, most notoriously, washed-up football player and B-actor O.J. Simpson cut off the heads of his ex-wife and a guy he thought she was involved with.

Then washed-up TV star Robert Blake's wife was mysteriously shot in his car when he conveniently returned to a restaurant they had just left - to pick up a gun he said he forgot no less!!

And now washed-up record producer Phil Spector got a hung jury in his murder trial, a case where a woman he had picked up in a club and brought back to his house, was shot dead. Suicide he said. Uh huh.

Even though Spector has a history of pointing guns at women, even though he basically confessed to murder when his driver came running in to the house at the sound of the gun shot, some of the numbnuts on that jury still wouldn't vote to convict him.

I know there are perks to being with a celebrity, the money, the great houses and travel, the easy entry to clubs, the fabulous service at restaurants - but, jeez, it seems like there's also a pretty decent chance you're going to be killed.
Posted by J at 12:54 PM

What is wrong with these people??

I can never figure out if the problem is that juries in L.A. are starstruck or if the prosecutors out there are incompetent?

Severin, I personally think people are starstruck. An LA jury has never convicted a celebrity of murder.

This actually surprises me that you don't think showbiz celebrities should get the free pass they get.