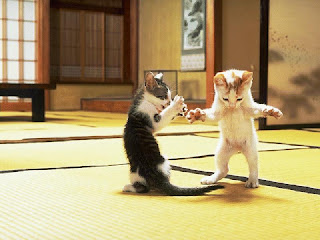 Two of the Republican candidates are in the middle of a delicious spat. A mysterious anonymous site was put up on the Web attacking the newest entry in the GOP race, Fred Thompson. Reporters believed it was put up by an operative of Mitt Romney.

The Web site, which questioned Mr. Thompson’s conservative credentials and labeled him “Fancy Fred, Five O’Clock Fred, Flip-Flop Fred, McCain Fred, Moron Fred, Playboy Fred,” among other monikers, was taken down yesterday after reporters began making inquiries about it to the Romney campaign.

The Thompson camp fired back:

This latest episode only serves to prove what many voters are already figuring out: Mitt Romney will do anything, say anything, smear any opponent and flip flop on any position in order to win. The American people in general and the Republican Party in particular deserve better than this.

This is sort of like when Iraq and Iran were fighting each other. You don't really care which side wins, and in fact you sort of hope they exhaust each other.

Oh well, at least stuff like this keeps those wacky Republican deviants out of whore houses and airport bathrooms trolling for sex.
Posted by J at 12:34 PM

That is the cutest picture :)

Well out of the two of them I think Romney, opportunist though he is, at least has some sort of record. What serious accomplishments has Fred Thompson got to run on besides his movie and TV career??