For this he should get another medal 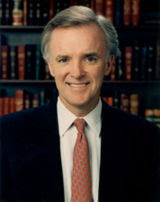 Bob Kerrey, the former Democratic Senator from Nebraska, and now the president of the New School here in Manhattan, is being urged to run for an open senate seat in his old state now that Sen. Chuck Hagel is retiring.

Nebraska is an incredibly red state, but Kerrey is fairly popular and so well known there that he's probably the only Democrat who could win these days, which would mean one more seat picked up by the good guys.

He's been wavering about whether he wants to get back into politics, and was dropping hints that he wouldn't undertake the race, but now is telling friends he might still indeed do it.

He's a little too conservative for my tastes, but, again, this is Nebraska we're talking about, and he would have to be to have any chance of getting elected there.

Of course, the down side for him would be leaving the presidency of a college in Greenwich Village, where he probably gets a nice salary and a great house, not to mention, well, being in Omaha as opposed to NYC. Can you imagine?

Kerrey is a decorated war hero, and lost one of his legs in Vietnam, so he's certainly suffered for his country before. He may just have to again. Omaha can't be that bad can it?

I don't think there is any way a Democrat - even Kerry - can get elected in Nebraska these days. It's not like it was when he was first elected.