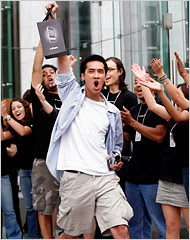 The early iPhone customers are crying because Apple just cut the price by 200 bucks.

I saw them lining up overnight outside the Apple and AT&T stores a few months ago to be the first to get the phones. That annoys the hell out of me whenever I see people doing that. Some folks do it for a new Harry Potter book or concert tickets. Puh-lease, get a life.

I wanted one of those phones, but who could be bothered to do that?

Not to mention, they never ran out of the damn things. You could have waltzed in anytime and got one after they started selling it.

But the outrage over the price cut is crazy. Did they think the price was going to go up? It always goes down for stuff like this.

I bought a hi-def TV set a couple years ago for $2,400. The same model today is about $1,000. That's technology. The point is, I needed a new TV, it didn't make sense to buy an analog set, and I've been enjoying it for the last two years. And I didn't whine because they cost less today than when I bought it.

Now Apple is apologizing and offering a $100 store credit to the cry babies.

On Thursday, in a remarkable concession, Steven P. Jobs acknowledged that the company had abused its core customers’ trust and extended a $100 store credit to the early iPhone buyers.

“Our early customers trusted us, and we must live up to that trust with our actions in moments like these,” Mr. Jobs wrote in a letter posted to Apple’s Web site.

How did they break a trust? By reducing the price? If you're an early adapter, you pay for it.

And, for once, I appreciate that damn Verizon contract, which has me locked in to them. Even if I wanted to, I couldn't switch to AT&T without paying an early termination fee which is some ridiculous amount of money. (Not to mention, I've heard bad things about AT&T's service.)

I say Apple should actually charge those dolts who lined up an extra $100 just to make them realize how silly they were.

And when the other cell phone companies eventually begin offering iPhones at greatly reduced prices once the exclusive deal with AT&T ends, I will really get the ol' shadenfruede going.
Posted by J at 11:30 AM

They seemed so smug when they got their phones. I'm laughing at them now! :)

This is so stupid. Like you said, prices ALWAYS drop. What a bunch of jerk offs.

I just have aPhone.

Why would anyone pay that much for a phone? I know it has music and camera but still!

same here, in time I will get one, once the prices fall farther and kinks are gone. But to own one for prestige is only cool in high school. And that is sad as is

AT&T sucks. It used to be Cingular and it sucked then too and I think it's even worse when it's AT&T.

One of my co-workers has one. it looks very cool but it doesn't seem to work that great. I'll wait to until they work out some of the kins and sell it for less money at the same time! :)

It's the Cult of Apple!!

I would like one too but not for even the lower price - it has to come waaaay down!

I've heard bad things about the iPhone and AT&T too but if someone would buy me one I would still be very happy! :)