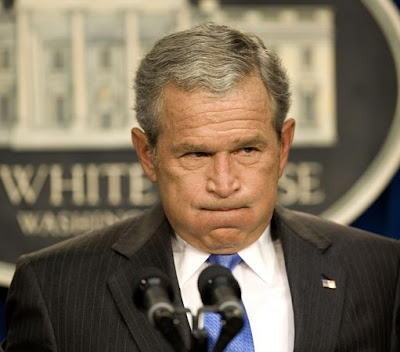 "With the departure of Karl Rove, the stench of failure hangs over the president - and his party wants to ignore the smell"
- The Guardian

It's amazing how far Bush has fallen, how unpopular he is, except among a few deranged right-wingers, who, inexplicably, still approve of his job performance.

And it's almost hard to remember now that just after 9-11, the entire country, left and right, rallied behind him, giving him an astoundingly high approval rating of 90 percent.

And then he blew it.

He let bin Laden escape in the mountains of Afghanistan so he and Cheney could carry out the neocon dreams of invading Iraq. He divided the country, questioning the patriotism of anyone who dared point out that his Iraq policy was a bloody debacle.

Domestically, he has been a disaster, presiding over an administration filled with corrupt, incompetent cronies, shown in especially stark terms with the response to Katrina,

And now even Republicans want nothing to do with him. There is even a report that Bush might not be invited to the GOP convention. "If they're smart, no," Republican pollster Tony Fabrizio told Newsweek. "Especially if things don't change in Iraq, we'll have the problem the Democrats had in 1968 with Lyndon Johnson and Vietnam. The question becomes: where do we hide the president?"

The "embarassing uncle" is a great line!

What amazes me is that in 2004 when he won the election, he was declaring a "mandate" given the number of votes he got. Only a guy like this could squander that this badly.