Republican hypocrisy? What? How? It can't be! 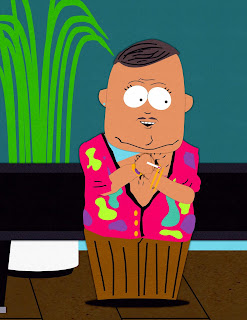 The undercover officer was monitoring the restroom on June 11. A few minutes after noon, Sen. Larry Craig entered and sat in the stall next to him. Craig began tapping his right foot, touched his right foot to the left foot of the officer and brushed his hand beneath the partition between them. He was then arrested.

While he was being interviewed about the incident, Craig gave police a business card showing that he is a U.S. senator. "What do you think about that?" Craig asked the officer, according to the report obtained by Roll Call.
- Washington Post

Another day, another right-wing Republican found to be a closeted gay man engaging in shenanigans in a public toilet. In the Minneapolis airport no less.

And he's a real piece of work, as Reuters reports:

Craig is in his third term and up for re-election next year. He is a former member of the Senate's Republican leadership and played an active role in the 1998 impeachment of former President Bill Clinton over the Monica Lewinsky sex scandal.

In a June 2006 Senate vote, Craig voted in favor of an amendment to the Constitution to define marriage in the United States as a union between one man and one woman. The amendment was defeated by one vote.

He's not alone in his self-loathing membership as a closeted gay man in a political party that goes out of its way to demonize gays. This year, we've already seen Florida State Rep. Bob Allen, the former chair of John McCain's campaign in the Sunshine State, busted for soliciting an undercover cop in a bathroom there.

And we all remember the fun case of Ted Haggard, the right-wing Christian holy roller, who was busted earlier this year for that whole crystal meth-gay hooker thing.

Former Rep. Mark Foley (R-FL), who was found to be trolling for teenage Congressional pages via IM, is thought to have been a major factor in Democrats regaining control of the majority in the 2006 election following widespread public disgust at his antics (hey, where's Dateline NBC when you need them?)

But, of course, it's not just the gay Republicans who are hypocrites. The straight ones like to get their freak on too. Sen. David Vitter (R-LA) provided some entertainment a few weeks ago when he was busted in the D.C. madam case (and, as extra bonus points, has a fetish for wearing diapers and getting shit on.)

You know, at this point, wouldn't it really just be easier to list the Republicans who haven't been arrested than to report on the various right-wingers who railed against gays or who voted to impeach Clinton and then turn around and are, er, knee deep in the very acts they supposedly abhor?
Posted by J at 1:07 AM

Don't forget Newt Gingrich and Rush Limbaugh and all their hypocrisy!

What is about these guys and public restrooms??