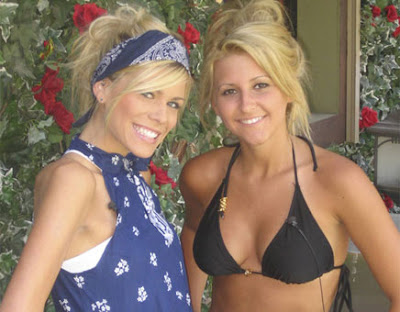 As I've embarrassedly admitted, I try to catch “Big Brother 8” on prime time CBS, and, frequently, on Showtime Too at the ungodly hours of midnight to 3 am during one of my insomniamanically (I made that word up, by the way) can't sleep periods.

There was little Catholic girl, Jessica, the quite adorable and quite busty blonde from Kansas – the heart of Red State America – walking in on Jameeka, the black chick from Washington DC, who was on her knees praying and crying to Baby Jesus.

And, of course, there's always Jameeka's friend, Amber, the cocktail waitress from Las Vegas (!!!) who cries and prays and kisses her cross necklace at the drop of a fucking hat.

Anyway, Jessica, who looked a little perturbed at Jameeka's shenanigans, noted, “Well, I do church, but it's not a big deal, and I don't do it here.”

It's quite hard to process a world in which a Kansas blonde is more sensible about religion than girls from DC and Vegas.

Then again, Jessica ended up making out with that little googly-eyed freak Eric, so who the hell knows anymore. The world has basically spun off its axis.

(Oh, and for all the Too Saucy non-viewers of BB 8, the pic is of Daniele and Jessica. Daniele is 20 and Jessica is 22. Perfect ages. Neither should change.)
Posted by J at 10:11 PM

Sorry Jessica has the most annoying voice. But I agree Amber is disgusting! How many times do you watch the show??

The best part about BB8 is that the producers are actually making fun of Amber. The last few episodes have been great...I am sure Amber will be thilled when she watchs herself on tv. I am sure she will be in tears. We can all look forward to seeing her on the November issue of Maxim...

Haha, no Eric...Amber is going to be on America's Top Model, remember? She "has the face for it"!!! lol

I'm embarrassed to admit I watched "Power of 10" when Amber was on it. She was crying at one point, and you could tell Drew was thinking, "What the hell is wrong with this crazy woman?" Then he said, "Amber, is being in the house getting to you?" Hahahaha

I can NOT stand Amber. How has she managed to survive so long??