Sorry, I'm a day late, but I forgot to note yesterday that Monday was six years to the day when George W. Bush received the infamous “Bin Laden determined to strike in US” Presidential Daily Bulletin.

That was August 6, 2001, just a little more than a month before bin Laden...well, we know what happened.

Bush was on his make-believe ranch in Crawford, Texas, at the time, and reportedly told the CIA briefer, "Ok, you've covered your ass now."

And of course he and his national security team did nothing. 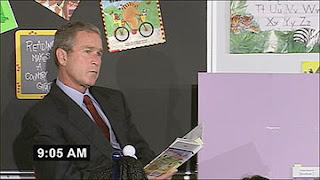 The empty look on his face that day was probably not unlike the look during that long seven minutes a month later, on Sept. 11, when he was at a school in Florida and his chief of staff whispered in his ear, "Mr. President, the United States is under attack."

And he sat there.

Until they realized he was frozen in fear and ineptitude and got him out and on a plane and hid him in an underground bunker in Nebraska.

I can't believe it's been six years!