Maybe he just likes to shop at Bloomies 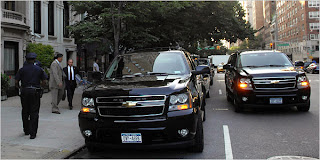 This knocks the, er, bloom off the rose somewhat.

Apparently our billionaire mayor, Mike Bloomberg, who famously rides the subway to City Hall every day, gets chauffeured from his E. 79th Street townhouse (he doesn't live at Gracie Mansion, the official mayor's residence, because his own house is nicer) to the subway.

The Times shadowed his morning commute for a few weeks and found he doesn't even go to his closest stop (77th Street) as it's a local, but instead goes to an express stop, 59th Street, at Bloomingdales.

On mornings that he takes the subway from home, Mr. Bloomberg is picked up at his Upper East Side town house by a pair of king-size Chevrolet Suburbans. The mayor is driven 22 blocks to the subway station at 59th Street and Lexington Avenue, where he can board an express train to City Hall. His drivers zip past his neighborhood station, a local subway stop a five-minute walk away.

That means Mr. Bloomberg — whose much-discussed subway rides have become an indelible component of his public image — spends a quarter of his ostensibly subterranean commute in an S.U.V.

“I never see him,” said Namela Hossou, who sells newspapers every morning at the downtown entrance to the mayor’s nearest stop, at 77th Street, four blocks from the mayor’s house. “Never, never.”

Okay, it's a little shady. But, hey, at least he doesn't frequently dress in drag, like some other former mayors we could name.
Posted by J at 12:53 PM

Well I would luv to get driven to my subway stop every day too! lol

Aha I thought he was one of the good guys!!

It takes me about 15 minutes to walk to the closest J stop nearest me. I hope he's paying for those cars himself and not taxpayers!

Brooklyninthehouse I'm pretty sure the cars of most city mayors are paid for by the taxpayers?