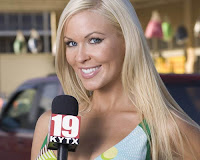 Yes, apparently, even Fox can be embarrassed. The network canceled the much-criticized show, "Anchorwoman" after airing only one episode.

The "reality" show, featuring an alleged model trying to be a newswoman at a small TV station in Texas, was critically panned...but, more likely behind Fox's decision were the anemic ratings.

I was going to watch that show too but I never got a chance! Oh well lol