What, his golden tongue isn't working?

The Times is reporting today that the foreign leader George Bush talks to most often is Iraqi Prime Minister Maliki.

In sessions usually lasting more than an hour, Mr. Bush, a committed Christian of Texas by way of privileged schooling in New England, and Mr. Maliki, an Iraqi Shiite by way of political exile in Iran and Syria, talk about leadership and democracy, troop deployments and their own domestic challenges.

Sometimes, said an official who has sat in on the meetings, they talk about their faith in God.

I know, I know, it's hard to believe George W. Bush can't talk the Iraqis into peace, what with that articulate way of his. 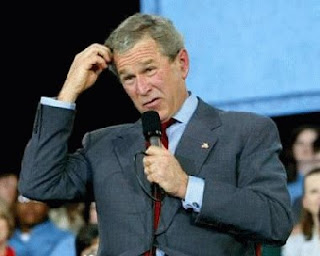 I mean seriously, here are two leaders talking, with one of them being a guy who can barely speak English (I mean our president, of course), and somehow he is supposed to be able to dazzle the leader of Iraq with verbal gymnastics and convince him to get that country together?

Not to mention, they apparently spend a lot of time blathering about God.

Yeah, that's just what that region of the world needs -- more religion in the mix.
Posted by J at 12:42 PM

That must be some conversation when those two are talking. lol

Can you just imagine W. talking about God with a Muslim?