The United States will face “a persistent and evolving terrorist threat” over the next three years, as Al Qaeda continues to plot attacks comparable in scale to those of Sept. 11, 2001, the nation’s intelligence agencies said today.

Despite efforts to root out Al Qaeda terrorists from their strongholds in the tribal areas of northwest Pakistan since 2001, the group has been able to protect or rebuild a cadre of “operational lieutenants” and its top leadership, the estimate declared.

And while Al Qaeda remains the greatest single terrorist threat to the United States, its leadership will continue to prod other terrorists in “extremist Sunni communities” to “mimic its efforts and to supplement its capabilities,” the 16 intelligence agencies agreed.
- NYT

There must be some mistake.

Weren't we told that we went into Iraq to "fight the terrorists there so we wouldn't have to fight them here?" Weren't we told that we had al Queda on the run? Weren't we laughed at when we said that taking troops and resources from Afghanistan and sending them to Iraq allowed al Queda leaders to get away? Weren't we promised that the 3,600+ Americans killed in Iraq, the tens of thousands wounded, and the hundreds of thousands of Iraqis killed and wounded - well it was just collateral damage in a worthy cause? Weren't we assured that our invading and occupying a Muslim country, overthrowing the dictator who held it together (and, of course, had nothing to do with 9/11) wouldn't really inflame the Arab world, which already hated us, and actually cause more to enroll in a jihad? 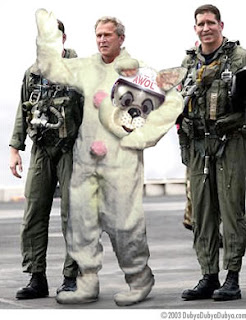 And now the U,.S. intelligence community is saying that al Queda has regrouped and is at pre-9/11 strength, and, oh, there probably will be another terror attack in the U.S., perhaps even this summer.

As someone who rides the NYC subway system a lot, I think I speak for most New Yorkers when I say to our esteemed president: thanks for nothing you fucking dope.
Posted by J at 1:16 PM

Oh great. I go through the tunnel every day.

Aha sure glad he's made us all so much safer, not like that president who allowed 9-11 to happen or anyth...ooops.