After I presciently posted a snarky comment Monday afternoon about Lindsay Lohan not exactly looking like she was toughing out her DUI aftermath, on early Tuesday she was arrested - again - for DUI and also cocaine possession. 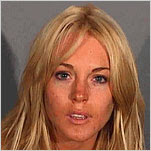 And the mug shot doesn't look quite as hot as the bikini shot from yesterday.

We'll see this time if there's any real change in her behavior, but meanwhile the tabloid press coverage of this case is going to make the Paris Hilton mishegoss look like a walk in the park.

She better hopes she ends up like Paris, though, and not Anna Nicole Smith, which is the road she seems to be heading down.

Lohan, who is already facing a drunken driving charge in Beverly Hills, was pulled over near the Santa Monica Police Department after authorities spotted her car chasing another, said Sgt. Shane Talbot.

Authorities conducted a field sobriety test and then transported her to the police department.

The 21-year-old actress was booked on suspicion of driving under the influence of alcohol, driving on a suspended license and possession of cocaine, among other charges, Talbot said.

Police found cocaine in one of her pants pockets during a pre-booking search, Talbot said.
- AP

She's actually not a bad actress so it's sad to see her throw her life and career away like this.

Somewhere in New York a certain EP is chewing hs sleeve and shrieking with girlish enthusiasm!

Someone on tv today said her career is over. No way. Everything gets forgiven in Hollywood.

You know even that mug shot doesn't look so bad heh!

I expect more from you....where are the snide comments? This reads like a news story.

Listen to me, Eric my friend, Too Saucy is not a democracy, it's a dictatorship - with moi calling the shots. Just for your impertinence you're back to owing me 8 pints again.

Are you kidding, I'm sure she's already planning her Larry King interview!

So let me get this straight. She's saying now the cocaine they found IN HER POCKET wasn't really hers? lol