In this country, Bush would probably give him a Presidential Medal of Honor

China on Tuesday executed the former head of its food and drug watchdog who had become a symbol of the country's wide-ranging problems on product safety.

''The few corrupt officials of the (State Food and Drug Administration) are the shame of the whole system and their scandals have revealed some very serious problems,'' SFDA spokeswoman Yan Jiangying said at a news conference held to highlight efforts to improve China's track record on food and drug safety.
- AP via NYT

Yikes - they don't mess around over there. 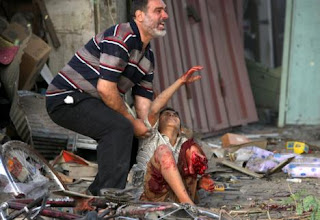 Here, Bush officials have presided over devastating screwups ranging from the pathetic response to Hurricane Katrina to fatally flawed Iraq WMD intelligence dragging us into that bloody quagmire, totally incompetent planning for the aftermath of the invasion, and, oh, let's throw in the horrendous conditions at Walter Reed Army Hospital too.

That's just a few of the many failures of the Bush regime, of course. And what do many of the officials get when their incompetencies are finally discovered? 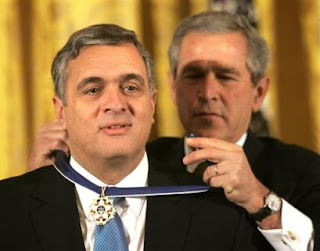 It may just be time to start having a few executions of the Washington elite to put a little fear of God in them. I'm just saying.
Posted by J at 3:04 AM

Why should they get punished? The problem is at the top.

Anon, it's called responsibility. They know exactly what kind of corruption they're getting into, and yet they still do it. According to you, that makes it ok if they're told to do something wrong?

They should punish the ones who do it AND the ones at the top who rule over it.

I would like to see the guy in charge of Hurricane Katrina executed, or at least thrown into jail for a few decades.