He's still got Laura and his little dog, Barney 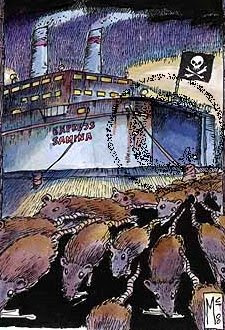 Support among Republicans for President Bush’s Iraq policy eroded further on Thursday as another senior lawmaker, Senator Pete V. Domenici of New Mexico, broke with the White House just as Congressional Democrats prepared to renew their challenge to the war.
- NYT

And another one jumps from the ship.

Of course, Domenici got in some political trouble in New Mexico earlier this year with his involvement in the U.S. Attorney firing scandal, so he's looking to get some brownie points from the electorate there. But when the Republican candidates running for president start backing off the Iraq policy, as they will, that's when you will know it will really be over for Bush and his disastrous war policy.

Right now, the candidates feel they still have to support it, because the GOP base who vote in the primaries are the rabid right-wingers who still support W. They're that strange 20 percent who continue to show up in the polls as laughably saying they approve of his job performance, and so the 2008 hopefuls feel they have to continue to back him on the war. But there's going to come a time when they're running in the general election, trying to get votes beyond that right-wing fringe, when supporting the war will be a political kiss of death.

And then they will run from the policy quicker than Dick Cheney can kick a puppy and drink its blood.

Of course, until it politically suits the Republicans, U.S. soldiers will be getting killed in Iraq every day. But, hey, the GOP is the party that supports the troops, don't you know.
Posted by J at 11:20 AM

10 comments for sex and the city... none for this.. know your audience jbk.

"And then they will run from the policy quicker than Dick Cheney can kick a puppy and drink its blood."

Cheny doesn't kick puppies, he swallows them alive in one gulp as he unhinges his jaw.
As for the cowardly ship-jumpers, what is their real solution?

Why is John McCain doing so bad? He was supposed to be in front of the repubs but it looks like his campaign is dying. He supports the war so shouldn't that help him??

Listen my husky, large-noggined, receding hairlined, troglodyte friend - on weekend evenings, the Too Saucy audience, like me, is out and about LIVING and contemplating what world-class restaurant to dine in or what fabuilous club to go to...unlike you in the sticks, where the big debate is should you go to Home Depot or Lowe's for your lumber needs.

which one of us?

That was to "Proud American" obob, since he was wondering why there weren't so many responses to this post, which went up Friday. (Also, see my comment about him at the "Sex and the City" thread.) I used to have to look at his giant noggin every day. It really is enormous. Plus, I can't tell from your comments yet if you are indeed a true troglodyte like him, so I wouldn't call you that. Although it seems like you two would get along swimmingly! :)