My friend Sarah came over Monday night for pizza and beer (Red Stripe on sale at C-Town – a little household hint, it's really really good with pizza) then, after we pigged out, we looked for a movie to watch. 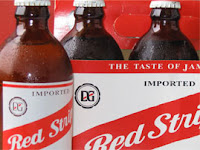 But, as usual, even with the 1,987 channels, including every movie station and all their multiple feeds and VODs, there still wasn't one goddamn thing on that one of us either hadn't already seen or particularly wanted to watch.

We ended up settling on an old movie playing on Cinemax OD, “True Crime,” with Clint Eastwood. He plays a “grizzled” reporter investigating the case of an innocent guy on death row and, natch, saves the day. Totally corny, totally cliché, totally unrealistic. But, come on, who doesn't enjoy a good Innocent Man on Death Row, Will They Save Him in Time? story. (Not to mention, at the beginning of the movie, 74-year-old Clint is making out with a 23-year-old cub reporter – nice touch, Clint!)

So, there's a scene where the innocent guy on death row is getting the execution procedure explained to him by the prison warden, who says something like: “...then we'll bring your final meal,” and, I swear, for the next 10 minutes all I could think about was what I would order if I was on death row and able to order a last meal.

God forbid I just think about actually going to a great NYC restaurant. No, I have to imagine being on death row.

Anyway, I don't know how realistic this was, because I'm not sure if you get to choose more than one of each course (I was very big on the apps) – and I'm pretty sure you don't even get to have alcohol – but the fucked-up thing is, I was actually enjoying imagining being on death row and eating a great final meal. 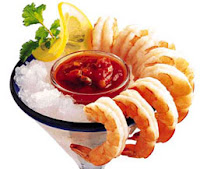 For an entree – a juicy filet mignon (medium rare) with creamed spinach and a baked potato with sour cream, accompanied by a warm crusty loaf of Italian bread with creamy butter on the side (oy gevalt, that's a lot of creams.) 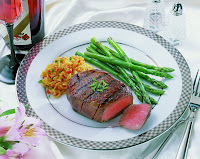 Then dessert – cheesecake with fresh cherries on top.

(I mean, what the hell, I'm not going to be worrying about my weight or my arteries - it's Death Row, damn it!)

And – of course, key detail – all of it is accompanied by an amusing little '04 Pinot Noir and a bottle of smoky Laphroaig Scotch, with a pitcher of icy water on the side.

And, fuck it, a Jack and Coke too, just for old times sake.

I figure, by the time they came to get me, I would be so logy from the food and buzzed from the alky, I wouldn't even really notice when they strapped me down and put the damn needle in.

I would go for a green salad then lasagne with garlic bread and lots and lots of red wine! :)

You're right, I don't think they'll provide alcohol. Or cigarettes, for hat matter...not that you smoke.