WASHINGTON - A progress report on Iraq will conclude that the U.S.-backed government in Baghdad has not met any of its targets for political, economic and other reform, speeding up the Bush administration's reckoning on what to do next, a U.S. official said Monday.
- MSNBC

I know, I know. It's hard to believe an ill-advised, unnecessary war that we were lied into by a dishonest administration, and that is being run by perhaps the most incompetent group of buffoons to ever hold the levers of government (can anyone say Hurricane Katrina aftermath or Walter Reed scandal) is not going to meet the targets for success. The minimal targets set by these people, no less.

But President Huffy McBelligerent doesn't care. The war will continue because he's only concerned about looking resolute. And more innocent people will die. 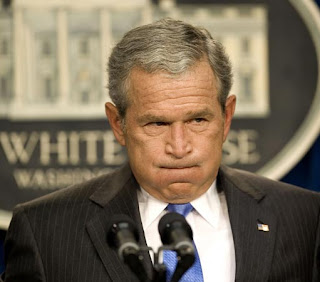 We are all praying for January 2009, when Boy George finally leaves office.

Hell, although it's for the wrong reasons (Bush doesn't hate Mexicans enough) even some of the right-wingers are finally beginning to turn against him.
Posted by J at 8:49 PM

There's a countdown clock to the end of the Bush admin. severin. You should put it on your web site!

I have the backwards bush keychain.

But it's sitting in my desk, not attached to my keys.