It's nice to know that George W. Bush is consistent. Consistently a prick.

For the first six years of his presidency, he had a Republican-controlled Congress who gave him everything he wanted, never challenged him, never exercised their Constitutional duties to act as a check on the Executive. And, of course, most grievously, he and they managed to get us involved in a seriously flawed foreign policy debacle.

But they managed to fuck up domestically too, of course (and let's not even talk Katrina). The economy he inherited from Bill Clinton - with surpluses as far as the eye could see - is gone, and now we're saddled with deficits as far as the eye can see. And a big part of that is because Bush and the GOP Congress were spending like drunken sailors, while at the same time cutting taxes on the fabulously wealthy (a hedge fund manager making $55 million a year pays a lower tax rate than a public school teacher these days.)

But now that the Democrats are in control in Congress, all of a sudden Boy George has found his veto pen.

And what does he want to veto?

The White House said on Saturday that President Bush would veto a bipartisan plan to expand the Children’s Health Insurance Program, drafted over the last six months by senior members of the Senate Finance Committee.

The vow puts Mr. Bush at odds with the Democratic majority in Congress, with a substantial number of Republican lawmakers and with many governors of both parties, who want to expand the popular program to cover some of the nation’s eight million uninsured children. 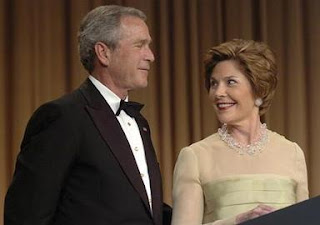 Let's keep spending God knows how many billions of dollars a month in Iraq. But, hey, fuck those sick kids who aren't lucky enough to be born into the Bush or Cheney clans.
Posted by J at 4:22 PM