Add your voice for the voiceless

Michael Vick, that scumbag NFL player who was involved with staging dog fights, has been indicted and the Humane Society is seeking voices from the public to urge the book be thrown at him.

They're looking for legal action and an NFL suspension. Coincidentally, a few days ago, after I finished lecturing a friend (I thought knew better) who was looking in a pet store and telling her that she shouldn't get a dog there as they keep the terrible puppy mills in business, and instead she should rescue a dog from the ASPCA, I also noted they ought to take people who run those puppy mills, and especially get the human flotsam who stage animal fights, and just throw them in a little barbed wire cage with a few dozen hungry abused dogs that they've been torturing, and let the dogs go to town.

But I guess legal action would be ok too. From the Humane Society: 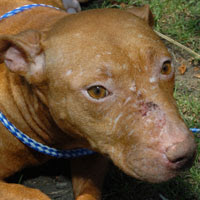 
This dog was one of 52 pit bulls seized from Michael Vick's property.

The outrage is unprecedented, and for good reason: Two days after a federal grand jury indicted NFL star quarterback Michael Vick and three cohorts on felony dogfighting charges, more than 100,000 people have called on the NFL to suspend Vick immediately.

You can add your voice today. Please urge the NFL to suspend Michael Vick immediately.

In a case that The Humane Society of the United States has assisted with since the alleged cruelties came to light in Virigina last April, the 19-page indictment describes abuses that are almost beyond belief:

In or about March of 2003, PEACE [one of Vick’s co-defendants], after consulting with VICK about the losing female pit bull's condition, executed the losing dog by wetting the dog down with water and electrocuting the animal.

In or about April 2007, PEACE, PHILLIPS, and VICK executed approximately 8 dogs that did not perform well in "testing" sessions...by various methods, including hanging, drowning, and slamming at least one dog's body to the ground."

The NFL expressed “disappointment” and said Tuesday that “we believe that all concerned should allow the legal process to determine the facts.”

Well, that’s just not good enough. These alleged acts were not petty or harmless; they were nothing short of gruesome and barbaric. And there is precedent for a suspension: Other NFL players, such as Pacman Jones and Chris Henry, have been suspended while they awaited trial and before they were convicted. Please contact the NFL today and urge the league to suspend Michael Vick.

What You Can Do

Leave a message with NFL Public Relations at (212) 450-2000 and ask the NFL to suspend Michael Vick immediately. Then send a follow-up email.

And if you are able, please make a special donation today to help us care for those animals while the case is being pursued by federal authorities.

Thank you for all you do for animals.

When your read the details of what they were doing to those dogs and how they killed them it's worse than even just the initial repulsion you get from hearing about the dog fighting.

There were protesters outside the NFL HQ on Park Ave today!

I had to stop reading about halfway through that. And look how sad that poor dog's eyes are :(

I hope they get it a really really good home!!!

How much do we know now that just about every person who thinks the dog fighting thing is not such a big deal is not a Republican????

it's not the cells that? are solder free, it's the glue. you can by blank solar panels on Ebay and many other sources, all solar supply stores will have DIY solar panels that will work with this. you can also use this glue for ANYTHING that can be soldered, but without the need for electricity or danger of a solder gun.