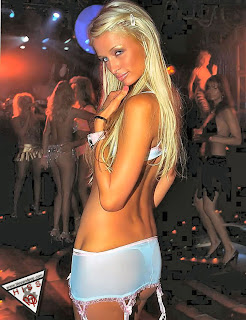 After spending five nights in jail, Paris Hilton was released early this morning and put under house arrest, The Los Angeles Sheriff’s Department announced today. “She has fulfilled her obligation,” said Steve Whitmore, the department’s spokesman. “She has paid her debt to society.”

Uh-huh. I'm sure she wasn't treated special at all.

The thing that always amazes me is why these rich celebrities go out and get shitfaced and then drive themselves.

Mel Gibson has a bazillion dollars. Why did he drive himself that night in Malibu when he got pulled over and arrested (although the good thing about that is, no one was hurt and we got to see the real anti-Semitic Mel).

But they can easily afford to hire a car service at a couple hundred lousy bucks, or even have a full-time driver. I don't understand why they get behind the wheel themselves after getting drunk or high?
Posted by J at 11:01 AM

Five days for drunk driving? Do you know how long you would get and how fast your license would be suspended your head would spin!

Poor dear - dont you know she had medical problems!!

ok, every time I look at her I get nauseous...

The double-standard how celebrities get treated if they get arrested is ridiculous!

She's back in jail you know!