"Representative William Jefferson, a Louisiana Democrat, pleaded not guilty today to federal charges that he solicited hundreds of thousands of dollars in bribes while trying to arrange business deals in Africa...investigators have said they found $90,000 in cash in a freezer during a raid on his home in Washington." 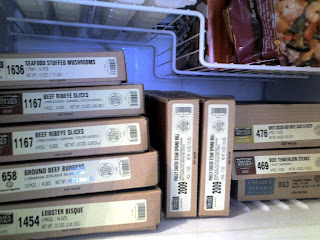 Seriously though, I know their lawyers probably advise them they have to call a press conference and proclaim innocence, but when 90 grand is found in your freezer, isn't it better just to say nothing.
Posted by J at 12:12 PM

Damn you have a lot of steak!

All that meat? I thought you loved animals? :)

villifies questionable GOP behavior, yet makes light of one his own with 90k in the freezer.

is afraid of bees, but loves his cees and dees! (HEYYOOOOOOOO, somebody ring me a bell!!)

Listen my husky large-noggined friend, I at least feel guilty when I eat meat, not like you wolfing down a greasy cheesesteak like a ravenous hyena attacking a gazele or picking a piece of shrimp off the ground and cramming it in your gullet!