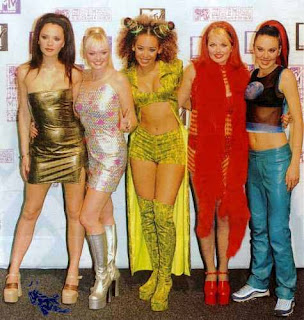 LONDON (AP) -- The Spice Girls announced Thursday that they have agreed to reunite for 11 concerts around the world in December and January. They will be the group's first concerts since it broke up in 2001, and the first with all five original members since Geri ''Ginger Spice'' Halliwell quit to pursue a solo career in 1998.

Half of The Beatles are dead, but this group is reuniting.
Posted by J at 12:08 PM

Oh no they were bad the 1st time around, now there like 10 years older!

Who the hell will go see them in concert??? My little sister used to like them when she was like 10. Now who will?

Who's your favorite Spice Girl? Mine is Sporty! lmao!!!