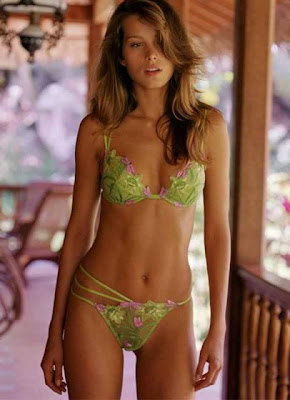 Depicting what it's really like to become a high fashion model in New York, TLC will debut "A Model Life with Petra Nemcova" July 13 at 10p. The eight-week series shows Petra mentoring six young women from different parts of the world as they try to break into the competitive and harsh world of modeling and hope to gain a contract with the NEXT Modeling agency at the end of the series. 25/7 Productions in association with The Mottola Company produced the series for TLC.
-Cynopsis

Nemcova is the model who was caught in the middle of that deadly tsunami in 2004, miraculously managing to hang onto a tree for hours at a time, after her boyfriend/photographer was swept away and drowned.

But, of course, in our celebrity-fixated culture, her "plight" became a huge story. Entire villages were washed away, but, hey, a model was distraught. (Granted, when a girl looks like her, we should be concerned.)

Meanwhile, after it was all over, Nemcova claimed she was going to re-evaluate her life and be more serious.

You know, mentoring aspiring models on a reality show isn't quite what I thought she had in mind.

And I get the feeling the new Paris "I've learned my lesson" Hilton will be just as serious following her jail experience.
Posted by J at 11:13 AM

I saw her interviewed somewhere - so stooooopid it's not even funny!