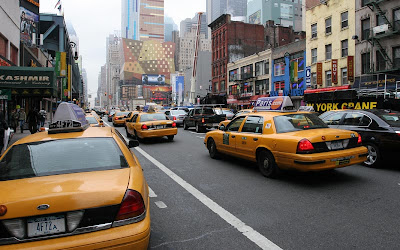 "NBC Universal has joined up with Clear Channel Taxi Media to put NBC content into New York City taxicabs. Beginning this month, 50 yellow cabs will be fitted with LCD monitors mounted on the back of the cab's front seats. The companies plan to eventually offer NBC programming to 5,000 of the 13,000 New York City cabs. The monitors will show content from NBC Entertainment, CNBC, and MSNBC, as well as local New York NBC affiliate WNBC."
- TV.com

Well, it might drown out the sitar music that's often blasting from the cab radio. Now if they can only do something about that pine cone air freshener smell.
Posted by J at 11:32 AM

Dude I PRAY for the pine cone smell lol :)

I wish they would fix the damn air conditioning in some of those cabs instead of adding a TV!!!!

I once had to get out of a cab because the driver was swerving through traffic so dangerously I really thought I was going to die. I got out at a red light and didn't even pay him. He was cursing me for two blocks!

hah holding on to that side strap for your life as Sue Simmons is rambling on about something. How perfect!! :)