Sometimes you can fight city hall - or the MTA 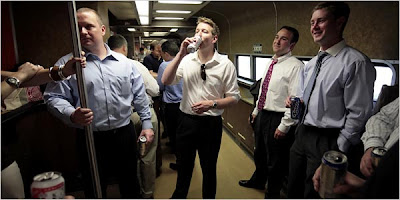 The city banned cigarettes in bars, and the smokers trooped out to the sidewalk. Trans fats in restaurants were next, and the French fry addicts mostly shrugged. But since the Metropolitan Transportation Authority announced that it was considering banning alcohol on commuter trains, it has been a different story.

Bankers and brokers and blue-collar workers spoke out in defense of the tradition of a Scotch and soda or a cold Budweiser on the ride home to Huntington or Greenwich.

And the authority listened.

Faced with an overwhelmingly negative response to the proposed ban, a committee of the authority’s board has recommended that the cocktail hour be allowed to continue on the trains and platforms of the Long Island and Metro-North railroads, according to a member of the committee and two people briefed on its findings.
- New York Times

I used to do that damn commute every day before I moved to the city. The bar car was one of the only pleasant things about being stuck on a train for an hour and a half.

Kudos to the MTA for listening to their tippling passengers.
Posted by J at 11:02 AM

They just wheel carts onto the LIRR, they don't have a whole bar car, but it's the happiest thing when you find him! :)

I used to ride the train and remember the bar car too but this was a few years ago before they had the smoking ban! They allowed smoking in the bar car but nowhere else on the train. It was terrible. You wanted to get a drink but when you walked into the car a wall of smoke hit you and made you gag. I would still go in there though! :)