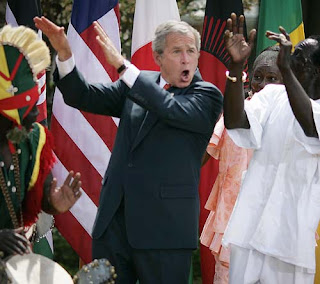 Larry Wilkerson gave an interesting interview to NPR on Thursday. He is a Retired Army Colonel, the former Chief of Staff at the State Department from 2002 to 2005 under then Secretary of State Colin Powell, a Vietnam War veteran, the former Acting Director of the Marine Corps War College at Quantico, and currently a teacher of national security at William and Mary College.

Suffice it to say, he's no lefty lib like me.

The Republicans lowered the bar for impeachment by going after Clinton, who they couldn't defeat at the ballot box, for getting a bobjob. In the process, the GOP instigated a constitutional crisis and made the U.S. the laughing stock of the world.

If that was grounds for impeachment, it's safe to say that Bush's lying us into a diastrous war, killing 3,300 Americans, tens if not hundreds of thousands of Iraqis, and making us less secure than before, is sure grounds to fire up the impeachment machinery again.

Sadly, it probably won't happen and we're stuck with President Cuckoo Bananas and his Dark Sith Lord - the Dick - through 2009.
Posted by J at 1:45 PM

lol Bush looks like a clown in just about every picture you see of him.

They would have to impeach both of Bush and Cheney, because if they just impeached Bush then Cheney would take over (even more than he already is). What a nightmare.

I urge you and your readers to take a few minutes to examine:

It's a list of the 25 most recent comments made by real Americans participating in an online poll/letter-writing campaign concerning the impeachment charges recently filed against Vice President Cheney, which are now being evaluated by the House Judiciary Committee. Comments can be sent to elected representatives and local newspapers at your option. The participation page is at:

Since this campaign began, three members of Congress have signed on as co-sponsors, in part due to hearing from their constituents. Make your voice heard!