I have a new guilty pleasure, besides Cadbury Crème Eggs, hot girls dancing on the bar at McFadden's, and an amusing little Shiraz with dinner. 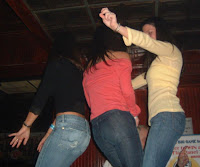 It's the free Movies on Demand station on Channel 1008.

That's where they put the On Demand programming for a group of minor networks that don't have their own separate On Demand channel like, say, HBO.

Ch. 1008 includes On Demand programming for nets like TCM, Sundance, and RHI (which I've never even heard of) but the one I've been watching a lot is Universal on Demand, which shows some so-bad-they're-good TV movies made by the Universal studio back in the 1980s and 90s.

Since they were produced for broadcast TV in that era, they're pretty tame by today's standards, no nudity or even heavy swearing, but, damn, there's some cheesy acting and plots going on.

They don't run commercials, but, as these were made for network TV, you see 30 seconds of black where the commercials were originally inserted, so each 15 minute or so segment of the movie follows the scene-climax-break pattern of TV movies.

And since it's On Demand, you can even pause it at that point and take a bathroom or kitchen break, just like viewers originally did when they watched “Murder Between Friends” starring Timothy Busfield.
Posted by J at 1:22 AM

Those arent the only guilty pleasures you have!!! :)