A senior lobbyist at the National Association of Manufacturers nominated by President Bush to lead the Consumer Product Safety Commission will receive a $150,000 departing payment from the association when he takes his new government job, which involves enforcing consumer laws against members of the association.
- New York Times

Corruption in the Bush administration? Say it isn't so.

But never mind that this guy is getting a fat check from a lobbying group as he joins the government - the very fact that Bush nominated a lobbyist to run an agency that enforces laws against that very lobbying group's members is rotten and is the real scandal. 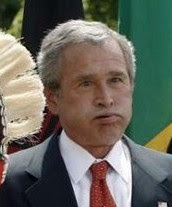 Then again, this is the administration that put oil company executives in an energy task force, and big polluters on an environmental study group. Nah, no conflicts there, I'm sure.

I guess we can't really be surprised anymore by the venality of these people. They're all dirty.
Posted by J at 10:21 AM