A theory of relativity

God bless Einstein and his theory with the sound waves and the passing train (or was it a space ship and people left back on Earth?) Anyhoo, I basically know the story - but this, my friends, this is the REAL theory of relativity:

I had to go into into midtown on Tuesday afternoon for a meeting. When it ended, I stopped in at Morton's Steakhouse (just off 5th) for a little post-meeting, winding-down, happy hour.

They have a great happy hour special there if you're a meat eater: three mini-cheeseburgers – and we're talking those amazing Morton's burgers – for four bucks. (I shouldn't even have told you about that, it's such a little-known, well-kept NYC secret, but what the hell.)

I had that and two glasses of shiraz as I relaxed and read the Daily News.

Well, I was grumpy.

So, natch, I gave the not-particularly-friendly bartender a somewhat basic tip of five bucks (come on, he brought over two glasses of wine and one mini-burger platter – he was actually quite lucky.)

On the way home, I passed by Uptown on 3rd.

You know, it just looked so inviting - the big windows were open wide in the delightful weather, Van Morrison was playing on the sound. Oy, temptation. Ok, I ran in and started ordering martinis. 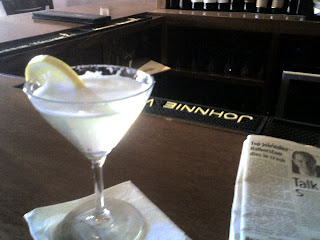 Well, three Lemon Drop martinis (photo: actual Lemon Drop from Tuesday, courtesy of the Q...and once I figure out how to post live from the Q, you're all in trouble) and two Stellas later – all from my favorite, blonde bartender there – and, what, technically, should have been a $30 tab, was a total charge of only $12 (not to mention, mixing those martinis is more work than pouring a glass of wine from a bottle). 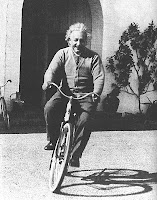 See how the whole relativity thing works?
Posted by J at 12:18 AM

And how much was because she had big boobs! :)

My boobs aren't big, they're husky!

Thank you
Your blog is very informative.
homework helper