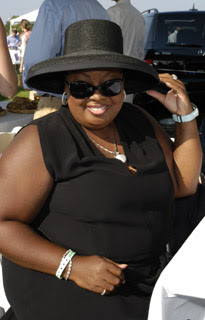 Star Jones Reynolds has landed her own daily talk show - and she won't have to worry about Barbara Walters this time. Court TV said Wednesday it had hired Reynolds to run a show about criminal justice issues that intersect with the pop culture world. The show, which has no title yet, will likely start early this fall.
- AP

Because, ya know, the public doesn't find Star annoying at all, and, in fact, has been clamoring for her to be put back on TV.
Posted by J at 2:07 PM

She annoys me. She just seems to much like a person that whines all the time, but then still expects everyone to care about what she does.

I was happy when she got canned from the View and now she's back. That should be the first case of injustice she talks about on her new court show. And not a hipster, she was not only a whiner she was always begging for freebies for her wedding when she was on the View - thats when I started really disliking her. Yuck!