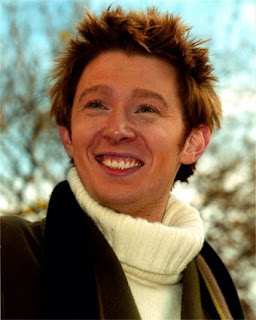 I just don't get the whole fascination with American Idol. It's an amazingly huge pop culture phenomenon, the highest-rated show on television these days, no less - but I have never seen an episode all the way through. Seriously, not one.

I've never really liked any of the singers or even the songs they sing. I mean Clay Aiken? Come on, people. Anyway, the point is, I just don't get the whole hubbub.

But any time I see a story about Simon Cowell, the mastermind behind the show, I have to chuckle at a little inadvertent and deliciously evil encounter I had with him a few years ago.

A friend at the company I worked for at the time asked me to help out at the Daytime Emmy Awards, which were airing that year from Radio City Music Hall.

So at about 6 pm on the night of the live broadcast (ironically, the Daytime Emmys air at night), I'm waiting for my folks who were going to join the parade of Daytime people and other celebs. They were all coming from a pre-show dinner at the Hilton on Sixth Avenue and crossing over to Radio City (which is on the other side of Sixth if you're not familiar with that part of midtown) where the broadcast would be emanating from.

The city shut down Sixth Ave. for a few hours, and that always goes over real well, and the Emmy people had a long-ass red carpet literally running from a side door at the Hilton, where the stars would exit, walk east on 53rd Street, and cross Sixth to the front door of Radio City at 52nd.

Well, I'm standing there waiting for my people, and watching the soap stars and the talk show folks and the game show hosts parade along, and there were probably a few thousand fans lined up along 53rd, squealing every time they saw a recognizable face, flashing their little cameras, crying for autographs. Oy.

All of a sudden this woman with a very English accent sidles up to me and says, “How do I get a guest onto the carpet?” Now, remember, I was not an official there, had never been to a Daytime Emmy Show in my life, was pretty bemused by the whole thing – although the open bar party at the Waldorf later that night was pretty damn sweet, I have to admit – so I was the wrong person to ask. But I was in a tux and had a little laminate around my neck, so I guess I looked like I knew what I was doing.

But I also must have looked at her a little suspiciously, so then she pulled me extremely close to her – as if she was about to divulge a national security secret - and whispered very imperiously in my ear, “I have Simon Cowell in the limo over there. He's presenting tonight.” And now she did a discrete but important neck nod toward a limo parked on 53rd.

I guess she thought the fans – who, let's face it, were really there to see Erica Kane and Regis and Kelly and the like – were going to tear Simon's clothes off or something. This was before Idol became as mega as it is now, but it was somewhat big - and already pretty annoying to me.

And, again, you have to picture this: the car was on 53rd between 6th and 7th - literally about 15 feet from the beginning of the red carpet at the side door of the Hilton. I had to bite my tongue to stop from saying, “Hmm, well, why not just walk him right there to the start of the red carpet where every other fucking person is coming in?”

Instead I whispered discretely back, “Ok, get the car over to 54th, and let him off over there by the side of the Equitable Building (I didn't even know if it was really the Equitable, by the way, but it sounded official) and then walk him through that right-of-way between the two buildings.”

She immediately ran back to the limo, which I then watched go slowly - verrrry slowly - westward on 53rd in bumper to bumper traffic. The driver had to actually keep going west, over to 8th Ave (since 7th runs downtown) so he could then go that one block up to 54th and come back east. Simon was pretty much stuck for about half hour in a car that was basically just going a long way around the block in what was now crazy backed-up rush-hour traffic (especially with 6th being shut down by this point, plunging the whole area into gridlock central).

I finally saw Simon and his handler looking a tad frazzled and walking down the alleyway next to the Hilton - less than 20 feet from where they had started out more than half an hour earlier. I made sure I was busy looking at something in the opposite direction.

lol you should have had him go through the Lincoln Tunnel. Now that's a detour!!!

About the show - people like to see someone come out of nowhere and make it big. But they also like Simon and his put-downs.