Look, a new shiny object to get the press all distracted

I'm sure it's just an amazing coinky dink that as the Bush administration is coming under increasing pressure for its latest scandal, the firings of the US Attorneys, a transcript has been released in which 9-11 mastermind Khalid Sheikh Mohammed confesses to a whole bunch of other crimes, including killing journalist Daniel Pearl, plotting to blow up Big Ben in London, and assassinate former presidents Carter and Clinton.

Nothing suspicious at the timing of this at all.

Of course, this guy's been "interrogated" in Gitmo for the last several years, so by this point he's probably also confessed to designing the levees in New Orleans, creating ABC's According to Jim, and inventing Ugg boots. 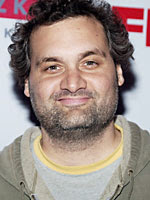 Now how do you know who Ron Jeremy is? :)