Are you allowed only one drunken night a week? I've never heard that rule, but I had cocktails with my friend Sarah at Rudy's on Tuesday evening for a little blowing-off-steam-after-a-long-day and she said that's the civilized thing.

Of course, this is the same girl who invited me for Thanksgiving dinner a few years ago and didn't know you have to defrost a turkey something like three days in advance. She started about noon on Thanksgiving day. Let's just say there was a lot of wine, potatoes and Ellio's frozen pizza consumed that night. 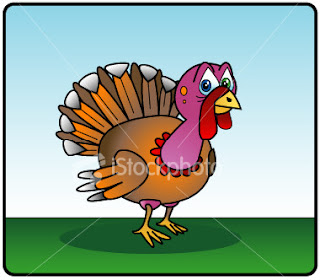 At Rudy's she managed to piss off the entire bar (and that's a tough bar to piss people off in) by playing a song on the jukebox about 8 times in a row. (Tom Petty, "Freefalling" - oy). I thought we were going to get killed.

So I always take her proclamations with a grain of salt. Also, with St. Pat's Day coming up, I believe there's an exemption to this alleged one-night rule. Anyway, it's on a Saturday, which doesn't really seem like it's the same week.

Hah sympathies on the turkey, it's a pain to make. All that prep time then you have to keep checking it when its cooking to make sure it's not drying out but you have to make sure its cooked enough so you dont get ecoli or something!

A few years ago my brother and I were headed to my mom's house for Thanksgiving. When we walked in that morning, I asked where all the food was. She said she didn't have time to go to the store the day before, so she was on her way out to buy everything.

She thought the stores would still be open. They obviously weren't. We ended up eating spaghetti she bought from a small corner market. She still hasn't lived it down.

Haha that was my first time making Thanksgiving and give me a break - that thing was birdzilla. It was too big!!!! I didn't realinze it took so long to defrost. Oh and who doesn't love Tom Petty!?:)