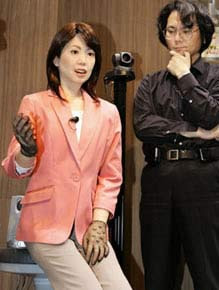 An ethical code to prevent humans abusing robots, and vice versa, is being drawn up by South Korea. The Robot Ethics Charter will cover standards for users and manufacturers and will be released later in 2007.
- BBC

Nice I had almost forgot about Asimov and his robot stories. That Will Smith movie they made of "I Robot" a couple years ago sucked. The books are really good tho.

The poor robot you end up owning. Now that will be abused!!!! hehe