If you ever need to be reminded of the difference between the two political parties, consider how some of the leading lights of each spent this weekend.

In Selma, Ala., Senator Clinton and Sen. Obama each gave rousing speeches honoring the anniversary of the Civil Rights era marches in that town. The media, of course, likes to play up their ongoing competition – um, yeah, news flash, media: they are candidates, each trying to get as many votes as possible as they run for the Democratic nomination – no shit they're competing.

But especially consider what they were competing for in this case: to earn the votes of black Americans. And after their respective speeches, they joined up to march across the Selma Bridge, where blacks were beat by redneck cops four decades ago as they marched for the right simply to be treated as human beings,

Meanwhile, the Republican good ol' boys were being regaled at the Conservative Political Action Conference's annual gathering in Washington by right-wing scum bag Ann Coulter, who made the following lovely statement: “I was going to have a few comments on the other Democratic presidential candidate John Edwards, but it turns out you have to go into rehab if you use the word faggot, so I — so kind of an impasse, can’t really talk about Edwards.”

Perhaps even worse than this hate monger's words, was the crowd's reaction: laughter and applause. Later, Coulter was swarmed for autographs. Think about that for a minute. At a gathering of some of the GOP's biggest names, including three presidential candidates and Dick Cheney, one of the keynote speakers felt free to call someone a faggot - and was applauded by the crowd.

She was actually introduced on stage by Mitt Romney, who is running for the GOP nomination, and she endorsed him. 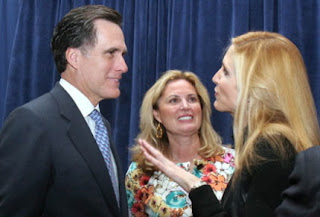 Later, Romney, Giuliani, and other Republican politicians had to renounce her words, and now she claims she was just “joking.”

But it's pretty telling that one party spends its weekend honoring the Civil Rights movement, while the other spews out hateful, mean-spirited diatribes.

And I think we know what side of that Selma bridge today's Republican party would be on.
Posted by J at 2:26 AM

I wonder what word she uses to describe Obama?

Another difference between the parties is the Democrats have a woman and a black man running and in the lead in all the polls, while the Republican candidates are (as usual) exclusively a bunch of old white guys.

It's really gross how people lash out and then claim later to be joking. I don't understand Coulter's appeal to some people.