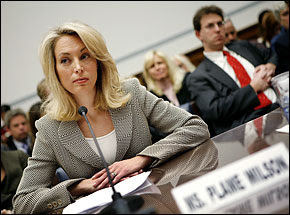 Valerie Plame, the glamorous CIA operative whose identity was outed by White House skunks like Karl Rove and "Scooter" Libby to punish her husband who was critical of the Iraq debacle, gave compelling testimony today before a House committee about how her career was ended thanks to the GOP's callousness.

"My name and identity were carelessly and recklessly abused by senior officials in the White House and State Department," Plame testified. "I could no longer perform the work for which I had been highly trained."

Plame, who could be played by Annette Benning in a movie, was, of course, just another piece of collateral damage in the Bush administration's ongoing war against democracy - just like those fired U.S. Attorneys who were dumped because they were either prosecuting corrupt Republicans or refusing to falsely charge innocent Democrats with crimes.

And just like the soldiers who have been grieviously injured in Bush's war, only to be shipped home to rot in rat-infested moldy hospital rooms.

Once again, the true colors of the right-wingers who claim to love the country so much are on display for all to see. It's not pretty.
Posted by J at 12:29 PM

"got played, got skunked"

You must know by now the White House feels that if anyone has to be sacrificed for Bush and his presidency, even if it's a CIA agent!!! well too bad.