When there's a political news story unfolding, you can actually watch the cable news stations with the sound off and get a sense of what's happened. There sure were a lot of gloomy faces and furrowed brows on Fox today when the news came down that "Scooter" Libby, Dick Cheney's former henchman, was found guilty in the CIA leak case.

Any time there's bad news for Bush or the Republican party (election night in November, for example) Fox "news" personalities go into a major funk.

And now the man who leaked the identity of Valerie Plame, an undercover CIA agent, to punish her husband because he had the audacity to call the Bushies out on their lies that dragged us into the bloody Iraq war, has been busted. 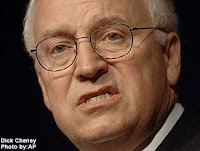 Of course, if there was real justice, Dark Overlord Cheney himself would be sharing a cell with his little buddy, Scooter.
Posted by J at 12:24 PM