As long as they don't do one with that annoying Can You Hear Me Now? guy 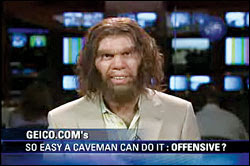 Winner for most unusual piece of development this pilot season goes to ABC, which has turned a series of quirky Geico commercials into an actual half-hour comedy project.

"Cavemen" will revolve around three pre-historic men who must battle prejudice as they attempt to live as normal thirtysomethings in modern Atlanta.

Project, from ABC TV Studio, is penned by Joe Lawson, an advertising copywriter who was behind the "Caveman" ads -- as well as other Geico commercials (think the cockney-speaking Geico gecko, and the reality TV spoof "Tiny House").
- Variety

It's a cute commercial, but a weekly show? It's basically a one-joke premise: oh, look, a cavemen in modern surroundings.

(Actually, didn't SNL do a series of sketches years ago with Phil Hartman as the Unfrozen Caveman Lawyer with the exact same premise?)

Oh well, I guess it can't be any worse than dreck like The King of Queens or Gilmore Girls.
Posted by J at 11:53 AM

Heyyy, Gilmore Girls is pretty good. You should watch it and you might like it! But the caveman show does seem like a bit of a stretch :)

I love the caveman commercials! The one where he's at his psychiatrist and his mom calls is too funny.

Ok I have to agree with Jill. Gilmore Girls is pretty good. I bet you dont watch it because you think it's a "chick show" but give it a chance and I think you would like it. The dialogue between them is really good.