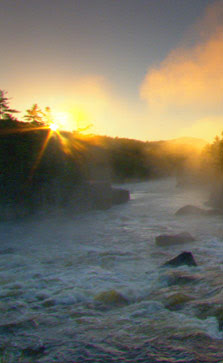 I know some of you may have gotten new high definition TVs in time for the Super Bowl this year. I, of course, have had hi def for a few years now. Unlike you slackers, I am an early adapter and, in fact, will soon be shopping for a second hi def set (cough), so let me give you a little programming recommendation.

There's a show on the Discovery Channel HD called “Sunrise Earth” that's absolutely stunning to watch. They basically just set up multiple hi def cameras at a location somewhere in the world and, at the brink of dawn, start filming, well, as the title suggests, the sun coming up, gradually illuminating the scenery. There's absolutely no narration at all, just the ambient sound (which on hi def, of course, is CD quality).

There was one airing today from a horse ranch in Moose, Wyoming, and among the scenes we saw a herd of horses grazing along the Snake River as the sun slowly came up, with the Tetons mountain range in the distance, mist gradually burning off the river. On the soundtrack, you could hear the river just continually whooshing by in the background, the birds awakening, and an occasional horse whinny.

Each episode is an hour, and watching the day literally wake up is fascinating. It probably sounds sort of dull, but it's actually strangely compelling and quite relaxing to watch.

And those horses, (oy, poor Barbaro, my diatrabe here from last May, when the injury happened) anyway, to see these magnificent creatures in this magnificent setting in that magnificent picture was something.

Kudos to Discovery HD, which consistently broadcasts some of the best hi def programs out there as far as picture quality. I don't know if they use better equipment than the other networks, or it's because most of their stuff is shot outside in natural light, not in a studio, but it's usually got the best picture in the still relatively small HD universe.

I watched the space station stuff on Discovery. It looked amazing!! I've had HD for more than year now hah.

We bought a Panasonic 42" plasma. My bf wanted it for the game but I didn't argue too much! :)

I'm still one of the slackers with a regular TV. I think it will be awhile before we can justify buying a hi-def television.

I would love to get one but I'm going to wait a while. The prices seem to drop by like $100 a month. I figure by the end of this year they will be about $500. Then we will do it.

I'm with you not a hipster. Why guys want to spend a thousand dollars or MORE on a tv set is beyond me? Yes I know, I know everyone - the picture looks much better, but come on. And they're practically giving away the usual style sets now if you really needed a TV. Wait till the prices become more reasonable!