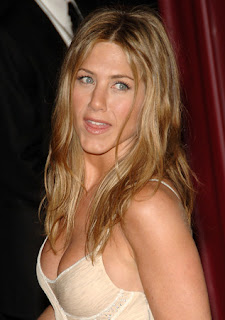 Jennifer Aniston now admits to getting a nose job.

That's sort of like George W. Bush admitting to being inarticulate.

In an interview with People mag:

Currently the tabs are having a field day over rumors about plastic surgery – your nose, your boobs. What's going on?
(Laughs) It's funny. I had [a deviated septum] fixed – best thing I ever did. I slept like a baby for the first time in years. As far as all the other [rumors], as boring as it sounds, it's still mine. All of it. Still mine.

They're still gonna run before and after pictures ...
Short of letting everybody have a feel, I don't know what else to do. I really am pretty happy with what God gave me.

First, let me say, I will gladly take her up on the offer of copping a feel to attest to her boobs' reality or lack thereof. Second, what's the big deal if she got a nose job? I don't know why she's so defensive about it. I always thought she was cute and the nose job makes her cuter. (And everyone who gets a nose job claims it was for a deviated septum – you ain't fooling anyone, girls!)

I always thought Aniston was a pretty decent actress. She was clearly the best one on “Friends,” and, in the few movies I've seen her in, (“Along Came Polly” and “Derailed”) she was quite good.

Jen, your nose and especially your boobies are just fine.

I thought Monica was better! :)

lol I really DID have a deviated septum though - altho I have to admit I like my nose better after the corrective surgery!