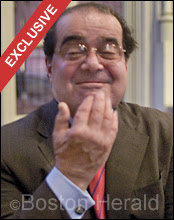 Ann S. Banaszewski, 45, was stopped about 7:25 p.m. in a 1996 Ford Econoline van near Gamon Road and Longfellow Drive after a citizen reported a possible drunken driver was at the McDonald's restaurant near there, Meloni said.


Well, I suppose I'd drink too if that bastard Scalia was my daddy, but, really, there does seem to be an alcohol problem among the GOP elite. Of course, she's probably just trying to forget all the damage done to the country over the last seven years since her father helped steal the 2000 election and give it to President Cuckoo Bananas.

I wonder if the Bush twins were in the Econoline with her???!! :)

Maybe those who live in glass houses shouldn't throw rocks--Alcoholism does not discriminate among political parties or any other socio-economic bases. We are all best served by assisting those drowning in its addiction to be freed from its chains. Alcohol-dependents don't want to stay dependent--encourage them in recovery instead of blasting them in their embarrassment.

Anonymous the problem is not that they're alcoholics, it's the hypocrosy factor of republicans always preaching they are morally superior then going out and getting shitfaced and then doing illegal things - driving drunk like Scala's daughter or underage drinking like the Bush daughters.

Velma--I think you've missed the forest for the trees--The problem IS the alcoholism, not the political persuasion of the parents or the children. I would hope you would want any alcoholic, regardless of political affiliation, to get sober. It's not been helpful to Ted Kennedy that he was "allowed" a free ride in earlier years and shouldn't matter that he is a Democrat. The problem is the addiction and I don't think either party considers itself immune from such personal tragedies. It is a shame to see them exploited in such a publicly humiliating forum. Let's encourage recovery, not finger-pointing.

Anonynous sorry but no, I think YOU'RE missing the whole point. Yes alcoholism or drug addiction is tragic. I don't know anyone who would argue with that. But the point is that it's your party that acts holier-than-thou and acts as if only Democrats are somehow morally lacking. In fact, as we surely know by now, Republicans are JUST as weak whether its drinking or drugs or sexual indescretions -- hello Newt Gingrich or Mark Foley. But if you listen to your side you would think only Bill Clinton had ever fooled around or only Ted Kennedy had ever had too much booze. Again it's the hypocrosy that was being discussed, not that it was Scalia's daughter drunk driving.

Don't waste your time Velma. Those folks on the right don't get irony so pointing out to them when a moralistic rightwinger getting busted for DUI like this woman or drugs (Rush) or screwing around (Newt, Rush, etc etc) goes right over their heads. Liberals are evil and immoral and that's all they know while they are the pure guys don't you see. It would be sort of funny if they werent so sad and delusional.

You seem to have leaped to the conclusion that I'm a Republican and blasting the party is all that matters. I don't give a hoot which party you support. And you won't find perfect people in either party -- hypocrisy is equally spread over the spectrum from left to right and all points in between. I just choose to take the high road and support recovery rather than blaming the donkey or the elephant. Who cares? Just get clean and sober and encourage others to do the same.

No anon. you were the one who started arguing about alcoholism and political parties and brought Ted Kennedy into the story. Now all of a sudden you don't care about politics? Riiiiight.