Everyone pitching in to do their bit 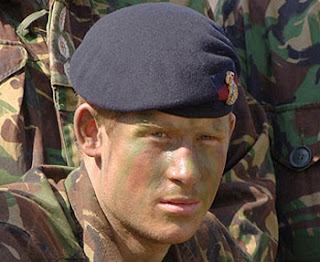 Although many British troops are getting pulled out of Basra in Southern Iraq, and eventually all of the Brits will be out of that sad country, there are still UK forces there, including new ones being sent over to replace already exhausted troops. Among the new troops will be Prince Harry, third in line to the throne:

A ministry spokesman said the prince would be sent to Iraq with his "A" Squadron of the Blues and Royals regiment "over the next few months" as part of the latest British troop rotation.

The flame-haired younger son of Princess Diana had always stressed that if his unit were to go into battle, he would want to be leading them.

Harry's regiment will leave for Iraq in May or June and could serve up to seven months there, Defence Secretary Des Browne said.

The 22-year-old prince, who as a Second Lieutenant has the rank of Cornet in his regiment, had reportedly threatened to quit the army if not allowed to serve on the frontline.

He has trained to become troop commander and will be leading 12 men in four Scimitar armoured reconnaissance vehicles. 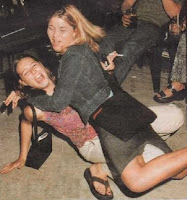 So I guess we'll soon see the Bush twins heading over there, right? Because, you know, the military adventure in Iraq is the most important thing we can do to preserve our freedom, according to their daddy, so I assume he's urging his own kids to volunteer and help defend us and not put all the burden on other families' children.

The only thing those two would volunteer for is guest bartender duty.