Good little right-wingers are breathing a sigh of relief tonight.

DENVER - One of four ministers who oversaw three weeks of intensive counseling for the Rev. Ted Haggard said the disgraced minister emerged convinced that he is "completely heterosexual."

Haggard also said his sexual contact with men was limited to the former male prostitute who came forward with sexual allegations, the Rev. Tim Ralph of Larkspur told The Denver Post for a story in Tuesday's edition.

I'm glad that's all cleared up.

It really is absolutely pathetic that these right-wing Christian nuts are in so much denial that they think Haggard, or anyone, can be "turned" from being gay. And that it was really all just some sort of silly fling, he was experimenting, he was choosing to be gay just for a while. 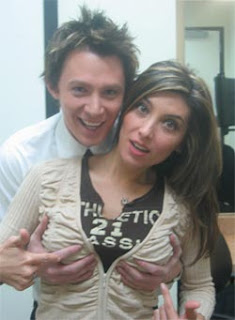 Why, don't you know, Clay Aiken loves him some breasts.

Because, you know, guys will really choose to be a member of a despised (certainly in the circles Haggard runs in) minority just for kicks - and the clothes and the haircuts, I guess.

The sad thing is, the sheep who follow these so-called men of God probably believe this shit.

And now, ladies and gentlemen, as they take the field, let's welcome our 2007 Republicannnnn Partyyyyyyyyy!
Posted by J at 9:11 PM

Why do you bring Clay Aiken into this story? He's not political and has nothing to do with Ted Haggart.

Perhaps you should bave done a bit of research. Clay is a registered Democrat. Yeah a Liberal. You know it is possible to be Christian and a Liberal, there are lots of us out there. But then that wouldn't have fit your agenda, would it?

Maybe you would like to compare the women Clay gets with the women you get. Want to bet who gets more? Leave him alone!!!!

"Anonymous" I may be wrong but I don't think the point was that Clay is a liberal or Christian?? :)

"Anonymous" I may be wrong but I don't think the point was that Clay is a liberal or Christian?? :)

Ha, yeah I know. That was my point of the word agenda.

Hey Blogger, show one time Clay has ever sided with the Religious Right.

Or for that matter diss the LBGT Community.

Read his book, you might change your views on his political leanings.

Not to mention that he is a Registered Democrat, has been since he first registered to vote years ago.

Oh come on, give Ted a break. Who hasn't slept with a gay male hooker after doing crystal meth with him? lol

This blog is infested with blogblight: n. Lies, half-truths, distortions and insinuations perpetuated mindlessly by bloggers publishing misinformation, photos or video from each others blogs, or the tabloids, with no thought to the veracity, authenticity or libelous nature of the content.

The blight bloggers range from professional journalists (who should know better) down to the celebrity gossip hacks. Similar blight occurs in the other news media (tabloids) as well, but is more pervasive on the internet because of the anonymity accorded many of those who perpetuate it.

Blogblight undermines one of the basic values of the internet, information sharing. Rather than seeing legitimate and accurate information, internet users see blogblight instead.

This blog also has a bad case of DumBlight.

wow all the Clay Aiken groupies are out as usual I see.

Hey anonymous he was saying - oh sure and Clay Aiken isn't gay either just like ted Haggert (sarcastic). Not whether Clay's a christian or a democrat. You brought that stuff up.

Clay has more class in his little finger than anyone on this blog.

Oh my god...does anyone really consider what JBK says to be gospel? Get a grip!

I read this blog because I enjoy hearing his views and his sarcastic sense of humor...not because I live and die by what he says.

It amazes me what people feel the need to defend...like what Clay Aiken's political leanings are, when that's not even the point of the post. Sheesh!

You don't take my word for gospel? Blasphemy midwestern heathen!! But yes, I'm not even sure now how this went off on such a tangent: the point of the post had nothing to do with Clay Aiken's political leanings - granted, I figured the Claynation would respond as they always do, and they didn't dissapoint - it was about Haggard's silly protestations of straightness that, er, may not be quite honest with his public.