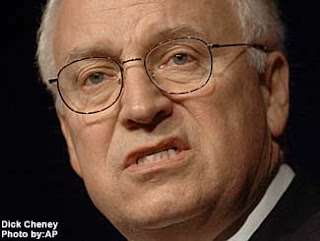 Vice President Cheney was shuttled into a bomb shelter at a U.S. military base in Afghanistan this morning after a suicide bomber blew himself up outside the main gate in an attack Taliban officials say was aimed at the vice president. Cheney was uninjured and in no real danger from the blast, which killed at least four people, including a U.S. soldier, at the gate of the Bagram Airfield.
- Washington Post

First, it's disgusting that a U.S. soldier and others were killed protecting this piece of human excrement, but the bigger problem is the alarming decline of a stablized Afghanistan back into a Taliban stronghold.

You remember Afghanistan? That's the country where the Taliban allowed al Queda and bin Laden to be based and plan and launch their 9/11 attacks on the U.S.

Afghanistan, the nation we struck in retaliation for those attacks, toppling the Taliban and forcing bin Laden to flee.

And then it was the country we took military resources out of so that Bush and Cheney could carry out an attack on Iraq - a country that had nothing to do with 9/11.

And we all know how well that's been going.

And now the Taliban is regrouping in Afghanistan.

Another Bush foreign policy debacle for the history books.
Posted by J at 11:52 AM

Dont you love how they always have to make secret unnannounced trips to places like Iraq and Afghanistan now. When did US leaders have to start creeping into town like wanted criminals until Bush took over!