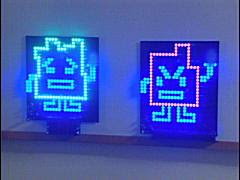 Just a final follow-up thought on the great Cartoon Network scare of '07.

I saw one of the most ridiculous aspects of it on some of the cable news stations, after the numbnuts in Boston had finally figured out they shut down the city because of a marketing campaign featuring cartoon characters.

What the hell is wrong with our country? Why do people act so childish and prudish?

I can never figure out what exactly they think will happen if someone out there hears a naughty word spoken on TV, or sees someone -- again, a fucking cartoon character - flipping the bird. Will the viewers' eyes start bleeding, will their ears explode?

Of course, this is all done to "protect the children" of parents who are apparently useless and have no control over their kids themselves. It's also done to appease the religious nuts who get all atwitter at the very thought of sex or dirty words.

If you've ever watched TV in the U.K. - and I'm pretty sure it's the same way in the rest of Europe, including Italy, home of the goddamn Vatican, no less - television and radio programs operate under the assumption that adults can handle an occasional F bomb or even see some naked boobs on screen (unless the shows are specifically geared for kids: think Thomas the Tank Engine or Teletubbies, etc.)

In sitcoms and dramas and chat shows, they use the seven dirty words, not gratuitously, but just as normal people do in normal, everyday life.

I've been watching "Extras," a great BBC sitcom that HBO is airing. The F word and the like get thrown out occasionally, and it's hilarious, and it's broadcast on standard, over-the-air TV in the U.K.

But here we have to show it on pay cable, and we blur out the middle finger of a cartoon character. Un-fucking-believable.

Great clip! That's Ricky Gervais who also created and starred in The Office - the original one on BBC. He write the words to that song (about himself! lol) and Bowie wrote the music.

haha in this clip someone shouts out it's shit when he's asked how his show is and David Bowie's girlfriend says something about twat when they're all singing. They would bleep those out on American tv.

Your rant about puritanical Americans and the news media is spot on. It's too bad your kind of sense isn't more common.

Blogged at The Rhetoric.

I love that show. Did you see the one with the kid who plays Harry Potter in it? He's trying to score with all the women on the set. Its very funny.

It's embarassing how censored TV is in the US. If you've even seen commercials from other country's they are so much more risque than our shows!

Anonymous said...
This comment has been removed by a blog administrator.
10:58 PM