Yet more words he can't pronounce 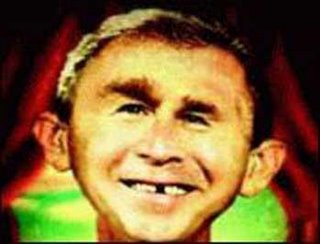 We all know by now that George W. Bush couldn't say the word nuclear if his life depended on it (it comes out new-kew-lur).

But the SOTU speech showed he apparently also has trouble with:

It's always sort of funny to hear him mangle his words, but it's actually quite sad that the President of the United States can't speak the English language.

Oh, and the most unintentionally funny line of the night, given the results of the November elections: “Whoever you voted for, you did not vote for failure.”

Second funniest line: "Our economy is on the move."

Sure is. Tech jobs to Bangalore and manufacturing to San Pablo.
Posted by J at 1:18 AM

hehe how drunk did you get watching it? :)