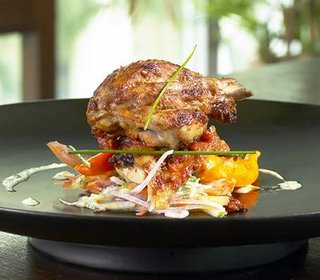 My friend Sarah is taking cooking classes these days and wanted to show off her tandoori chicken, if you know what I mean, so she came over to Chez JBK Monday night to make it here, since she basically has a crappy kitchen while I have my beautifully renovated gleaming stainless steel workplace.

Let me first say it was magnifique. I supplied the alkie and went with an amusing little Riesling - I'm getting so good at pairing the appropriate wine with the appropriate food, if I do say so – as well as a six of Red Stripe Jamaican beer. Kudos to the chef and bartender.

She went heavy on the spices, so after dinner, waiting for the flames to die out, we tried to find something on the 1,994 channels Time Warner supplies. This includes every movie channel known to man, with their various multiple feeds and their On-Demands, and yet still couldn't find a goddamn thing that looked good that one of us hadn't already seen.

So we ended up going to the pay-per-view On Demand section and settled – and I do mean settled – on "The Wicker Man." It's a Nicholas Cage remake of an old British thriller. Ok, people, if you take one thing away from my Too Saucy ramblings, besides instructions on how to vote, take this away: do not, repeat, do not under any circumstances watch this movie. It was two hours of my life and $3.95 that I will never get back. Oy. Bad.

After the movie, as I grumbled about how Sarah had talked me into it because “Nicholas Cage is such a good actor,” I was flipping around and noticed that one of the movie stations was showing "Sliver."

I don't get it. This movie seems to be on continually. I'm not exaggerating - it seems to air at least once a week on at least one of the movie stations. Last month, I actually saw it was airing on Showtime Two and Encore Mystery almost simultaneously.

What the hell is up with that? Why is this film – a so-so, B-level mystery movie from 1993 - always playing? Did it somehow slip into public domain? Does the producer have blackmail pictures of the heads of all the movie channels? I saw it years ago and wasn't particularly bowled over, yet it keeps coming back. It even features one of the lesser Baldwin brothers in it – ugh. Truly a mystery. 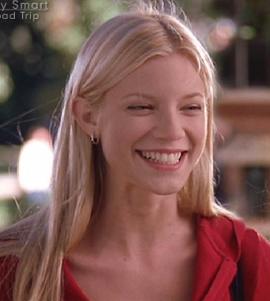 Meanwhile, we landed on "Scrubs," which I've started catching in syndication as I never actually watched it in its network run. It's not bad. That blondie who played one of the daughters on Roseanne Barr's show for a season is a regular and she's pretty cute. Even better, the episode that aired last night had guest star Amy Smart, who is so adorable it's not even funny. May I just say - grrrowwr.
Posted by J at 1:11 AM

hah I've seen that Sliver does seem to be on a lot too. I guess people keep watching it?

They've been pushing Wicker Man on pay-per-view lately. Thanks for the stay away advice! :)

That chicken looks amazing. Now I want to learn how to make it! :)

I'm jealous you get so many channels. I only get somthing like 250.

It was fun and the chicken and wine went great together! And sorry about the movie lol

That movie was ok but nothing amazing. I think all the movie channels must be Sharon Stone fanatics! :)